Full disclosure on this one: I met Josie Jaffrey on Twitter before I’d heard of any of her books, and I’m honour-bound to love anyone who loves my cat as much as she does. That being said, this is going to be way more than a polite ‘thanks for being my friend’ review, because this book is genuinely an amazing, gripping, inventive, five-star read! 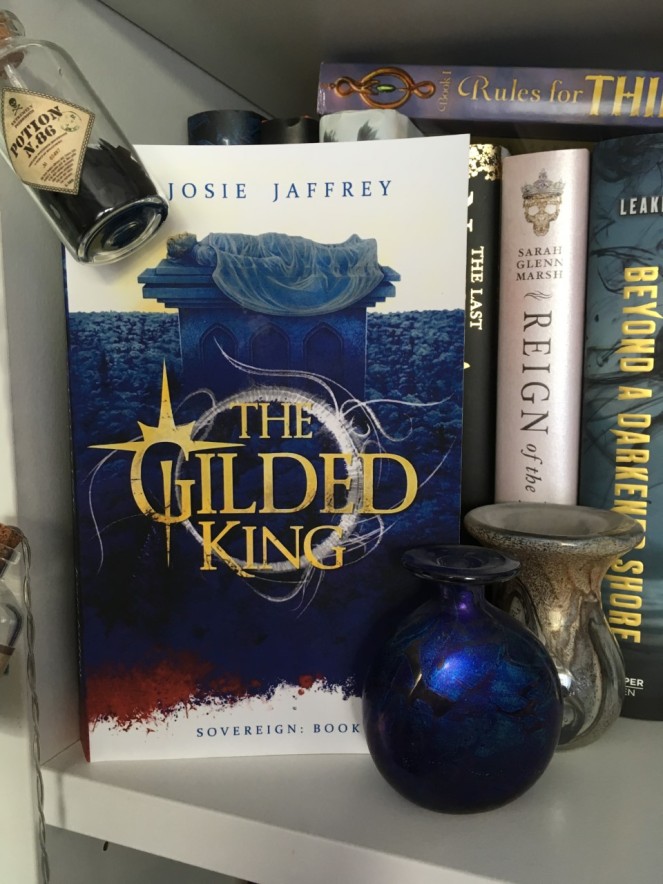 Vampires are my jam, but I haven’t read a great vampire book in soooo long (probably since Sunshine by Robin McKinley) because I like my vamps to come with world-building beyond ‘oh hey, we got bloodsuckers in New York/Paris/London – and they’re hot!’. Right away, with The Gilded King, it was clear I was getting a well-thought-out society with an interesting relationship between vampire and human culture. I thought the world-building was really unique, and combined dystopia with paranormal fantasy really well. It’s just so clever!

The main setting is The Blue, which is the only city left in the world after a zombie apocalypse. There is a vaccine against zombification, but it makes humans un-eatable for vampires, so these clever suckers set up a city where they keep unvaccinated humans safe so that they can be used as servants and as snacks. Josie has in fact written an earlier series in this world, which I haven’t read yet, which may go further to explaining how society got into this mess in the first place, but I found that everything was explained well-enough for me to get a hold on it and follow the story through the aftermath of the apocalypse. I loved the nods to the previous countries that used to exist, before everything went a bit undead.

The Blue itself is fascinating, with the tiers of society from Nobles (the vamps) to Candidates (humans who could deserve to be turned) to Attendants (humans allocated to vampires to feed them) to Servers (general human servants). Every element of the city’s workings has been thought out – and the city’s culture is a little bit Roman, too, which appealed to the classicist in me! The power of myth is also explored with the figure of the Gilded King himself, which you will discover as you read. This is a very well-thought out society.

All the characters are just fantastic. We have two viewpoint characters: Julia (a human who becomes a personal servant and vending machine for a slightly odd vampire, Lucas), and Cameron (a vampire in search of something important outside the safety of the city). I loved them both! Often, with multi-POV books, I end up favouring one character over another and rushing to get back to their chapters, but with The Gilded King, I was totally engrossed in both Julia and Cameron’s plotlines, and couldn’t wait to find out what either one was doing next.

Julia is a really wonderful, realistic woman, whose mistrust of the Nobles made me instantly connect with her. She isn’t taken in by the pretty trappings of immortality, unlike her best friend, and so it’s even more gripping to watch her get drawn into the tangles of her new life when she becomes Lucas’s attendant. And wow, Lucas is great! New book boyfriend for sure. He’s got that tall, dreamy vamp thing going on, but also, he’s a soft cinnamon roll romantic cutie pie gardener… I was rooting for Julia and Lucas to get together from the beginning, but no spoilers! I really, really loved that he was actually 20 and just learning how to be immortal. You see a lot of vampires who are hundreds of years old but look 17, and I always wonder why they would be interested in high-school age girls (looking at you, Edward Creepy). Lucas is of a similar age to Julia, and this made all the difference to me in terms of supporting him as a character.

Cameron, on the other hand, is actually hundreds of years old, and jaded with it. I loved his drive and his snark and his budding relationship with the mysterious Felix (gay vampire relationships YES PLEASE). Cameron’s plot line takes place mostly outside the city, so this is where we see a lot of the world-building come to life, and learn more about the way society fell. Having Cam’s eyes on this was a really clever way to avoid info-dumping, because he offers opinions on things rather than just remembering them. I can’t wait to find out more about him as the two story lines come together, as he feels more guarded than either Julia or Lucas.

The language is lovely: descriptive, but never purple; taut, but never boring. There’s a strong thread of suspense woven throughout the novel which kept me desperately flipping pages. (Sidenote, I raced through this book in about two hours and will go back and reread to savour it!) Honestly, I’m trying so hard not to spoil anything but there are so many amazing moments I could pick out that made me gasp – the tension was pitch-perfect. I was messaging Josie throughout whenever something took me by surprise. I didn’t realise to begin with that we were getting zombies, which I usually avoid (since they scare me to death), but while these scenes were heart-pounding, they never crossed into terrifying territory for me, so fellow zombie-haters, you’re safe.

It’s so hard to categorise this book, because it blurs the lines between so many sub-genres of SFF: dystopian, post-apocalyptic, quest fantasy, zombies, vampires, romance, mystery… I loved it. And I think anyone that loves any one of those elements should love it too. I cannot wait for the next book in the series to come out, and in the meantime, I’ll be picking up the Solis Invicti series to slake my thirst! I can’t wait for more of you to read this book so we can yell about it!

Five out of five cats for sure!

16 thoughts on “Review: The Gilded King”