I have had this book sitting on my shelf for a couple of months, having ordered it from the US in order to get it as soon as possible. I’ve been putting off reading it because I was just too scared that it wouldn’t live up to expectations. Numair was my first bookish crush, and I have been desperately anticipating this book since the very first rumours that Tamora Pierce might write it, 15 years ago. I grew up on Pierce’s books, and I’ve just been terrified that this new one might not be the same magical experience…

But I really needn’t have worried. It’s quite simply perfect. 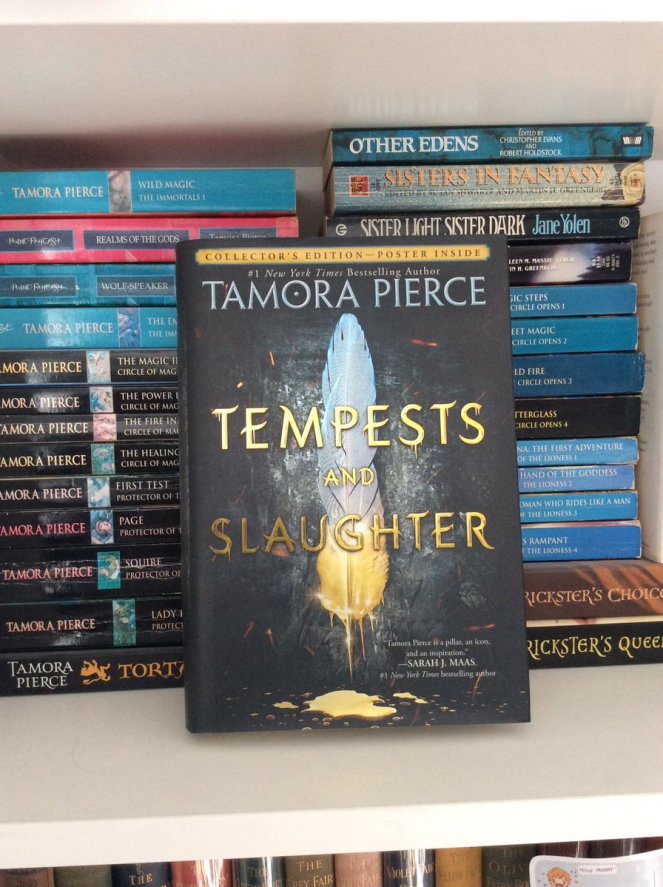 Honestly, this book took me right back to being 11 years old. I have read all of Pierce’s books to death, and could probably recite most of them to you, so believe me when I say that I was dying for this book. I grew up on Pierce, and along with Diane Duane, Diana Wynne Jones, and Patricia C Wrede, I credit her with so much of my development as a reader, writer, and as a person. I modelled my behaviour on Alanna’s bravery, Kel’s kindness, Daine’s persistence. I dyed my hair red as soon as I was allowed. I married a lanky, wise-cracking teacher. I still meditate using Daine and Numair’s technique.

Tempests and Slaughter starts, as so many of Pierce’s series do, with the protagonist at 11, starting their education, and following them as they grow up – the difference being, this is her first male protagonist, and this is a prequel exploring the adolescence of Numair Salmalin, the mentor and love interest of Daine, the protagonist of the Immortals Quartet. We meet Numair before he’s even thought about taking a mage name, back when he was plain old Arram Draper. He’s a magical prodigy, and is one of the youngest attendees of the School for Mages at the University of Carthak. The book follows him throughout his training until he is a young man, and I assume the series will bring us up to the beginning of Wild Magic, because really, he isn’t that much older when Daine meets him.

In The Emperor Mage, the third book of the Immortals Quartet, Daine and Numair visit Carthak and meet several figures from Numair’s past – Varice Kingsford, the now-Emperor Ozorne, and Master Lindhall the animal mage, to name a few key players. Tempests and Slaughter takes these relationships out of backstory and into real life, which was fascinating for me. Ozorne in particular is a very, very different person as an adolescent than he is as Emperor, and I am fascinated and a little bit terrified to see how he transforms over the course of this series. He’s already much closer to the throne at the end of Tempests and Slaughter than he was at the beginning. I loved seeing how Arram, Ozorne and Varice work as the classic magic-school trio, and it sheds a lot of light on the events of The Emperor Mage and how that must have affected Numair. I definitely need to reread it in the light of this new information. Man, the depth of these characters.

I loved catching all the little hints and links to the other series in here. I’ve been very vocal about the fact that I have hated seeing bloggers waving this around like any other new YA series – it’s a prequel, and to read it without already knowing and loving these characters seems kind of disrespectful. Of course, it stands alone in terms of plot and characterisation, but there’s a lot to miss if you don’t know to watch out for certain references. There’s a few smaller ones that will fly past without missing much – some of the magic works referenced are by Coopers, etc – but Ozorne’s love of the menagerie, for just one example, explains so much and sheds so much light, and I think without that these sections may have come across with much less impact. There’s a lot more that I can’t talk about without spoilers for this, the rest of this series, and the Immortals quartet, but please hit me up on Twitter if you want to talk about it (and find out where I gasped out loud!).

On the other hand, perhaps not knowing the endgame of the Immortals books would allow you to root harder for Arram and Varice’s relationship, which seems like it will gain more focus in the next book. Knowing what I know, I was completely not rooting for this to happen, but perhaps readers going in cold might have found them more shippable. I was surprised how much I was able to put aside my prejudices against Varice and Ozorne, but I’m sorry, Numair/Daine was one of my first OTPs and I’m not interested in him kissing anyone else ever.

I’ve seen a couple of comments on Goodreads that this is a boring book because it just follows Arram through his normal life – but this is exactly what I love about Tamora Pierce. These people are special – they have unusual magic, or are chosen ones, or are the first female something – but they still have normal lives. I love seeing people go to classes and have a fire to learn things. Why else would you pick up a book about a magical school? I never enjoyed the later Harry Potter books much because they took away the world I was interested in: learning about magic. I adore that Arram’s class schedules are in here. I love learning about the uses of magic with him (can I get a hell yeah for the use of herbs in medicine alongside ‘magic’ magic??). I love that even when he’s in the middle of enormous battles of wills between gods and mortals, he gets punished if he doesn’t do his homework or sasses a teacher. This is exactly what I’m here for. Yes, it’s formulaic, in as much as it follows the pattern of Pierce’s other series, but that’s what I wanted, and I would have been disappointed if it had been bombastic chosen-one fantasy.

(A side-note that yes, the bits about male puberty are awkward to read as a woman, and probably were to write. But I’ve always been thrilled with how matter-of-factly Pierce handles her heroine’s puberties, with frank discussion of periods, contraception, and the absolute pain in the arse that is growing breasts, so it’s actually nice that she didn’t shy away from the awkwardness of male puberty.)

I read this in one sitting. All 450 pages of it. I felt like I was a kid again, bubbling with sheer delight at Pierce’s magic world, desperately turning pages to soak it all in. The writing is spot on. The characters are, after mere pages, real old friends. I loved getting a chance to know more about Numair. I loved the difference in the magic teaching in Carthak as opposed to the teaching in Tortall, which we’ve seen in other books. I loved every single second of Tempests and Slaughter.

Do you know what? I’m going to break the rules.

Ten out of five cats.

8 thoughts on “Review: Tempests and Slaughter”