I’m really excited to be part of the blog tour for Three Bloody Pieces, because I’ve never read a historical novel set in this time period, and also, books about witches and cats are so rare in adult fiction! This is an excellent read with lots of complex women and adventure, and you get a fascinating glimpse into history as well.

A dead king, a queen who is more than she seems, and a witch who uses the dark arts to entrap her.

Queen, widow, beggar – Lady Caitlyn is all three, and now she can add murderer to the list.

When death and treachery propel her south to Normandy, to seek sanctuary with the exiled Prince Alfred, visions of a woman with ancient eyes travel with her.

Herleva is a woman filled with ambition and greed. A woman who intends to be more than a commoner. A woman who gets what she wants by whatever means possible, even if she has to practice the dark arts to achieve her goals.

A woman who is a witch.

Caitlyn finds herself caught up in a magic which changes her very being. A magic which produces a king to change the lives of every man, woman, and child in England.

Three Bloody Pieces starts in Wales in the early 1000s, with the tale of Caitlyn, whose husband, the King of Deheubarth, and whose father, the King of Gwynedd, have been slain by Llewelyn ap Seisyll. Caitlyn is forced to flee her home and her country for fear of her life. At first, the book seems as though it will be the story of Caitlyn’s attempt to take back her kingdom, but that plan quickly goes awry, and she becomes entangled with two Normandy witches, Herleva and Arlette. Though Caitlyn is reduced to little more than a beggar, the witches’ machinations mean that Caitlyn will be intimately acquainted with the fight for the English throne – though she may have to do it as a cat…

I loved how much historical content there was in this story. We meet Edward (the Confessor) and his brother Alfred Aetheling, as well as Duke Robert of Normandy. Herleva was real too (she was the mother of William the Conqueror). There are notable changes to the history, particularly as the real-life Herleva is split into two characters, Herleva and Arlette, but this fully makes sense in context. It’s a fascinating insight into a period that really doesn’t get much attention in fiction. There’s an author’s note in the back that explains some of her research, and which bits of the book are based in fact.

Caitlyn is a great character. She’s strong and determined, and clever enough to be interesting plot-wise. She does spend the first couple of chapters asking incredibly stupid questions (“Is this a tavern?”), which you could put down to two things, depending on generosity: either she’s in shock from her husband’s brutal death, or she’s a conduit for info-dumping. However, she swiftly smartens up and becomes extremely easy to root for. She’s actually very cat-like, in her curiosity and cunning. She’s very aware of the difficulties of being female, and while this does lead to a few uncomfortably misogynistic thoughts about women, it does a good job of showing the relentless sexism of the period.

There’s a very strong cast of women in this book, and I liked seeing the ‘behind-the-scenes’ elements of daily life in this period. Herleva and Arlette are skilled at manipulating the men around them, in ways that affect history, and though the men are, of course, the major political power players, it’s really interesting to watch how their lives are affected by women. The magical aspect may well be fictional, but the influence of queens and mistresses is all fact.

Speaking of the magic, it’s wonderfully creepy and pretty historically accurate in terms of the use of herbs and techniques. Caitlyn is repulsed by and intrigued by Herleva’s magic, so we get some wonderfully grim descriptions – witches sure get through a lot of bodily fluids! Although I would very happily have read a non-magical book about Caitlyn’s attempt to defeat ap Seisyll, the witchcraft was one thing that really made this book stand out for me. There aren’t any flashy powers or magic battles, just women, working hard and using their brains.

This is the first book in the Caitlyn trilogy, and I’m really excited to see what happens next. If you’re a fan of Arthurian or Tudor historical novels, I highly recommend picking these up to get a glimpse of life in the bit in between. If you’ve always wanted to read about cunning-women, rather than wizards and mages, then this is a must read! You can grab it on Amazon here. 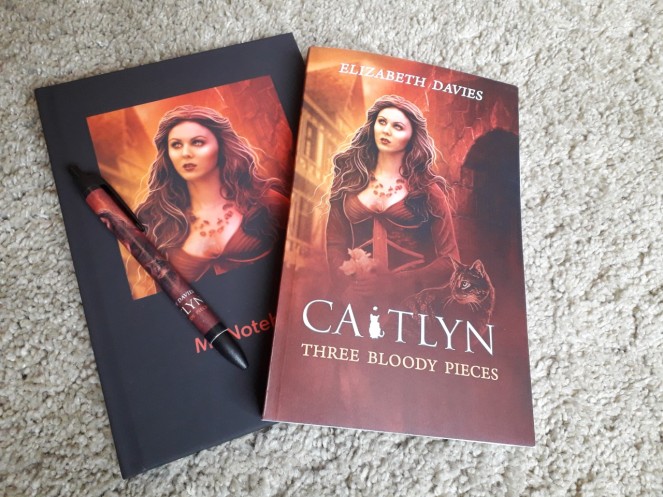 *Terms and Conditions –Worldwide entries welcome. Please enter using the Rafflecopter link below. The winner will be selected at random via Rafflecopter from all valid entries and will be notified by Twitter and/or email. If no response is received within 7 days then I reserve the right to select an alternative winner. Open to all entrants aged 18 or over. Any personal data given as part of the competition entry is used for this purpose only and will not be shared with third parties, with the exception of the winners’ information. This will passed to the giveaway organiser and used only for fulfilment of the prize, after which time I will delete the data. I am not responsible for despatch or delivery of the prize.

Elizabeth Davies is a paranormal author, whose books have a romantic flavour with more than a hint of suspense. And death. There’s usually death…