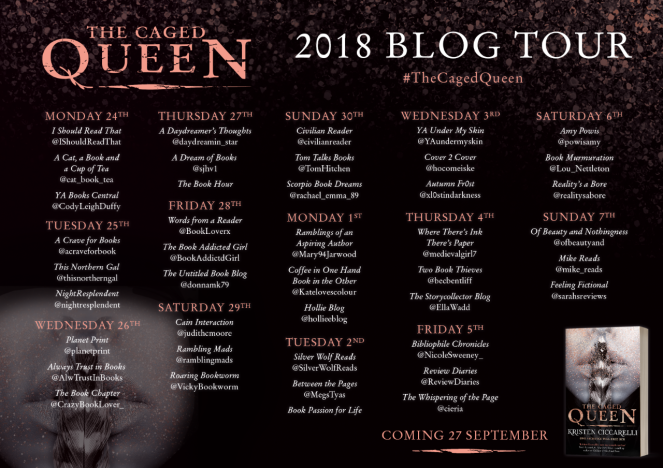 I adored The Last Namsara, so I was thrilled when I was offered the chance to join in on the blog tour for the release of its companion novel, The Caged Queen! It may well have fewer dragons, and we no longer follow the character of Asha (who I love for obvious reasons!), but The Caged Queen is an absolutely stellar tale of sisterly love and female strength.

Read before: Only the first couple of chapters in an E-ARC.

Ownership: Paperback sent from Gollancz for fair review; hardback pre-ordered by me from the US to match my copy of The Last Namsara!

Once there were two sisters born with a bond so strong that it forged them together forever. When they were angry, mirrors shattered, and when they were happy, flowers bloomed. It was a magic they cherished – until the day a terrible accident took Essie’s life and trapped her soul in this world.

Dax – the heir to Firgaard’s throne – was responsible for the accident. Roa swore to hate him forever. But eight years later he returned, begging for her help. He was determined to dethrone his cruel father, under whose oppressive reign Roa’s people had suffered. Roa made him a deal: she’d give him the army he needed if he made her queen.

Together with Dax and his sister, Asha, Roa and her people waged war and deposed a tyrant. But now Asha is on the run, hiding from the price on her head. And Roa is an outlander queen, far from home and married to her enemy. Worst of all: Dax’s promises go unfulfilled. Roa’s people continue to suffer.

Then a chance to right every wrong arises – an opportunity for Roa to rid herself of this enemy king and rescue her beloved sister. During the Relinquishing, when the spirits of the dead are said to return, Roa can reclaim her sister for good.

All she has to do is kill the king.

It took me a little while to get into this book at the start, because I had fallen so deeply in love with the protagonist of The Last Namsara, and I was a little disappointed that she isn’t anywhere to be seen at the start of The Caged Queen (you know, since she’s a wanted fugitive). This is definitely a companion novel, rather than a direct sequel, but I do think it would be useful to have read the first book to have some idea of the political background of the story. However much I would have liked to see more of Asha’s adventures, I swiftly came to love Roa, our new protagonist, almost as much. Roa is the wife of Dax, who is Asha’s brother and the new king of Firgaard, and who was fostered in Roa’s childhood home. This wasn’t a love match, though – they married for purely political reasons, and Roa is really struggling with learning to cope with a wilful, promiscuous husband who is nothing like the child she grew up with.

This is exactly the kind of political fantasy I like to see. I love it when outsiders to the court have to learn to navigate particular foibles of their new lands, and The Caged Queen manages this perfectly. Roa is a scrublander, so has to deal with both her own dislike of the formalities and machinations of Firgaardian politics, and also with the prejudice that her new people hold against her. There is a lot of plotting, and it’s impossible for Roa to tell which side she should be on – should she trust Dax, or is he just a smaller version of his evil father? Should she kill him, or can she learn to love him? It’s a classic YA trope, but something in Roa’s voice feels astonishingly fresh and un-cliched, and I was as conflicted as she was.

The key to Roa’s story is her relationship with her twin sister Essie – who is a hawk. At the beginning of the novel, all we know is that Essie had an accident eight years ago, and her soul was transferred into a hawk, which has remained Roa’s companion through everything. Roa’s drive to restore her sister to her normal form underlies everything she does and makes such a difference to the course of the action. It’s a true, pure, almost fiery love, and it’s just so well-written that you can feel every inch of the bond between the two sisters. In a world which is not overtly magical (there are no wizards or spells), I found Essie’s transformation fascinating, and heartbreaking, and beautiful. It would be spoilery to tell you any more, so you’ll just have to read it to understand how utterly gorgeous this relationship is.

I would have raced through this book had I not wanted to savour it. The prose is beautiful, and flows from one page to the next in a way that utterly compels you to keep reading. The book is peppered with flashbacks, which are printed on grey paper, and these are just as enthralling as the main storyline, revealing tidbits that unlock so much in the present day (though I did have a shock halfway through when I looked down and saw my thumb was completely grey!). Towards the end of the book, I barely felt like I was reading. I was just watching the story unfold, heart in mouth.

If you loved The Last Namsara, you should adore this (though it is sad that there aren’t so many dragons). The world-building is subtly clever, the relationships are utterly believable, and the people feel real. A must-read for those who love political nuance, exciting schemes, slow-burn romance, and simultaneously heart-warming and heart-breaking sibling relationships. The Caged Queen will be out on the 27th September (this Thursday), so add it to your TBR! And don’t forget to check out the other stops on this tour – Justine from I Should Read That is also posting today, and Judith from Chain Interaction will be posting on Thursday!

Five out of five cats!

Follow A Cat, A Book, and A Cup of Tea on WordPress.com
Join 2,082 other subscribers