I was so pleased when KA Reynolds offered me the chance to read The Spinner of Dreams early, as it was one of my most anticipated MG reads of the year! As it turns out, it was even better than I’d dreamed… 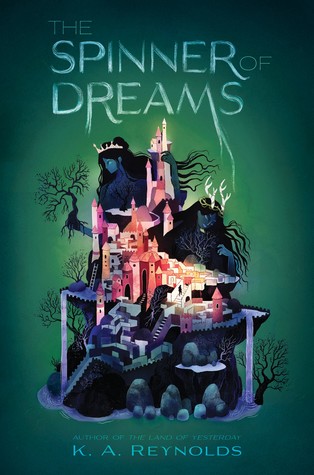 Book: The Spinner of Dreams by KA Reynolds

Ownership: E-ARC sent by author for fair review. All opinions my own.

It’s been really difficult to write this review, because I am so head over heels in love with this book that I keep getting a bit incoherent in my gushing. This is a magical fantasy tale that reads like a mash up of classic childrens’ literature and traditional fairy tales – and it has amazing #ownvoices anxiety, PTSD, and panic disorder rep. It would be beautiful if it were just a tale of friendship through weird magical peril, but to have a main character who suffers intrusive thoughts and panic attacks is just incredible. Personally, I didn’t start having panic attacks until I was an adult, but if I had been a kid who had them, this book would have meant the world to me back then – and it does now.

Annalise lives in a town where everyone hates her, because of her curse. She was cursed at birth by the Fate Spinner, the evil half of a pair of royal twins who rule over people’s lives, and now everything goes wrong for her and the people around her. Despite the fact that she hates her giant hand, with its strange birthmark, she hasn’t allowed this to make her miserable or cruel to others – instead, she is brave, optimistic, and kind. She has developed coping mechanisms which comfort her, and it was fab to see these included (her repetitive hair-stroking resonated with me, as I often plait small bits of my hair when I’m feeling anxious). I loved her interactions with her parents, who are also strong, kind, supportive, and loving – I think this is pretty unusual for fantasy! It’s nice to see nice families.

One of Annalise’s companions on her journey is Muse the cat, who appears first as a shelter cat looking for a home, but is quickly revealed to be much more mystical than that! You know I think all books are better with cats, so when I found out that Annalise wanted a cat so badly, I was like ‘yep, I am all in for this character’. I loved Muse! He’s so fluffy and wise and wonderful, and I loved that he was a Siberian Forest Cat, which is a very similar breed to Tomte, who’s a Norwegian Forest Cat! Muse’s appearance at the shelter is the catalyst that makes Annalise decide that she will not tolerate her curse anymore, and from there, the story gets really magical. To be honest, I would happily just have read about her daily life, which goes to show how much I love the characters and setting! But once Annalise sets off to realise her dream of living curse-free, she ends up having to battle her way through the Labyrinth of Fate and Dreams…

The Labyrinth is part Wonderland, part Fae realm, and all danger. The tone of the book from this point, and the bizarre and scary creatures that Annalise meets, reminded me a lot of Chris Wooding’s Poison, which was one of my absolute favourites as a kid. Both books look at the dark and dangerous side of magic, requiring their heroines to find inner strength to survive the machinations of other-worldly beings, and both sit just on the right side of terrifying. The Spinner of Dreams is not in any way derivative of Poison, but they share a sort of overall feeling, and will probably sit next to each other on my shelf, whispering spooky things to each other.

I don’t want to spoil anything about what happens in the Labyrinth, because watching it unfold had me on the edge of my seat, but I think it’s safe to say that Annalise has to learn a lot about how to accept herself, the same way she accepts everyone else, before she can triumph. She gains the guidance of some excellent friends (there is a gay fox gentleman, guys – he’s wonderful!), and they help her to see that she can take control of her own life. This is exactly the kind of narrative I like – girls learning to accept that though they may be scared, they are powerful, and that it takes every facet of their being to become powerful. This is going to become a classic. I’ve already pre-ordered a hardback, and I’ll be recommending it for years to come (not just to middle grade readers – I think everyone should read it). It’s a hot candidate for best book of 2019 for me – and yes, I know it’s not even the end of January. Go pre-order it, please!

Five out of five cats, obviously!

13 thoughts on “Review: The Spinner of Dreams”