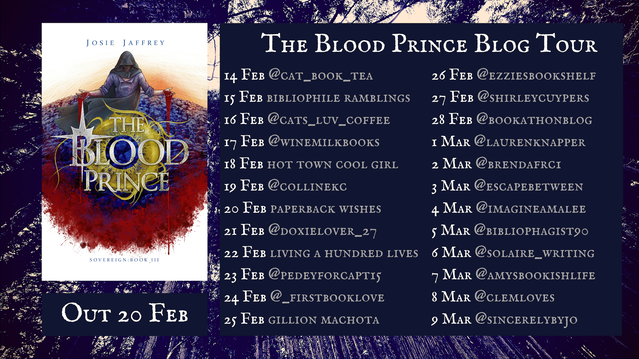 I am SO excited to be kicking off the blog tour today for Josie Jaffrey’s incredible The Blood Prince, the final book in the Sovereign trilogy! I adore Josie’s writing and this book is no exception – it’s a wonderful, perfect finale to the series! 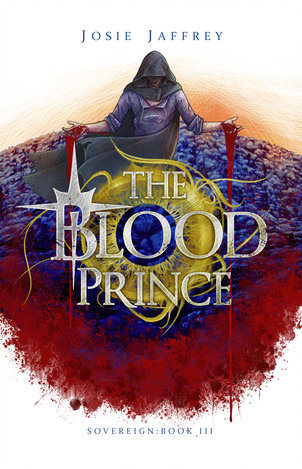 Ownership: E-ARC sent by author for review – all opinions my own. I will be purchasing a paperback on release day to complete my set!

A quick disclaimer: I do consider Josie a friend, and you can often see us chatting on Twitter. This doesn’t affect how I feel about her books, I promise! I think these are incredible on their own merit!

So, this is the third book in the Sovereign trilogy. You can find my review of Book One, The Gilded King here, but I’ll try to keep things as spoiler-free as possibles! But you know, if you keep reading past this point, you may get accidental spoilers… (Incidentally, if you’ve yet to start, The Gilded King is currently free on Amazon, so what are you waiting for?)

We’re still following Julia and Lucas, and Cam and Felix, as our main characters, in a world where there is one city left, controlled by Roman-esque vampires and filled with their human servants. The Blue, as it is called, has broken down somewhat since the first book, and the Red, the wild, zombie-filled outside, plays a much larger part in everyone’s lives. The legendary king of the vampires has woken up; the stolen queen of the vampires has returned; and things in the Blue are basically not that rosy.

I loved how much Julia has grown and developed through the series – she starts out as a wide-eyed, naive girl, and she matures into something powerful and self-assured. In a world where there are such enormous age gaps between the characters (immortality is a bitch, huh), it’s really cool to see humans holding their own. Her relationship with Lucas is constantly being redefined as she grows and changes – Bella Swan, take notes. The power imbalance shifts drastically and I am here for it. Lucas continues to be adorable, and he certainly does some of his own growing, but he becomes less of a focus as Julia learns that there’s a lot of other things going on in her life…

Cam is my very favourite, though. Since reading The Gilded King, I also worked my way through Josie’s previous series, the Solis Invicti quartet, which is set some centuries before this series. Cam is a prominent character in this earlier series, too, and the difference in his character between then and now just broke my heart. As I said in my review of The Gilded King, I loved his snarky, jaded, I’m-too-old-for-this-shit nature, but learning that he wasn’t always like that made me feel for him so deeply! His relationship with Felix, the mysterious woodsman, had my heart twisting and my breath catching in places – I love reading relationships filled with ambiguity around people’s loyalties. I just wanted to give Cam a big hug throughout. I was really glad Felix was there to stand in for me!

I’ve mentioned the Solis Invicti series – while this series stands alone, I found that there were many callbacks and hints that were nice to catch on a reread of The Gilded King, and I think that having the emotional investment in Emmy and Sol, who were the focus of the earlier series, meant that the ending of The Blood Prince was extra special and emotionally fraught to me. You can 100% read this series alone, but if you read the SI books first, there’s treats in it for you.

Oh, man. I’m so invested in these characters and this world. I’m really not ready to leave, though I think this is a really well-done conclusion to the series. The ending, without giving anything away, is so satisfying and hopeful that I was left really happy. Josie puts her characters through A LOT, and I want to wrap them all up in cotton wool and take them away from her for a holiday! I’ve intentionally kept everything very vague in this post (sorry if that’s frustrating!), but I can unequivocally say that this is the perfect ending to the series arc, and without a shadow of a doubt, if you like vampires, dystopia, strong female characters, great worldbuilding, or really great stories, then you need to read this ASAP. And then talk to me about it!!

If you join Josie’s Readers’ Club, you can get a free prequel short story, Cara Mia! And there’s a standalone short story, Living Underground, that is free til the 17th February, for a taste of Josie’s amazing writing!

Don’t forget to check out the other stops on this amazing blog tour!