I was initially tempted to try this book by the fact that it was a mini collection of works in a series. I like romance series that focus on siblings, and have them pop up in each others’ stories, so the Lyons family sounded great. I got much more than I bargained for, though, because this family is far more intense than the average… 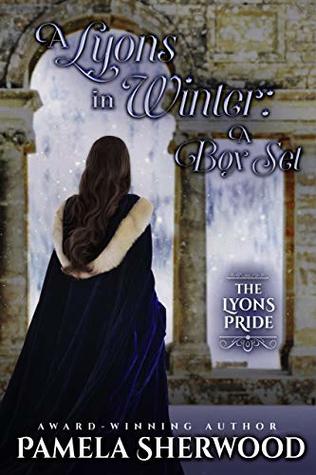 Book: A Lyons in Winter boxset by Pamela Sherwood

Ownership: E-ARC provided by NetGalley free of charge. All opinions my own.

This box set contains two short stories, two novellas, and the first full length novel in the Lyons Pride series. Also mixed in are some really interesting author’s notes, where Pamela Sherwood explains how she drew inspiration for the Lyons family from the film A Lion in Winter and the historical figures it was based on. I really appreciated these nods to history, though they are not obtrusive and the storyline doesn’t follow history – these are new characters, there’s just inspiration behind them. There’s also a large amount of Shakespeare woven throughout the writing, with plays being put on and also a seemingly endless bank of quotations for the characters to pepper their speeches with. It shouldn’t work, but it really does, and it makes for a fun game to spot them all. The last thing to mention is that these are all Christmas stories – a time of cheer and being in close quarters with your family, which makes for a nice way to tie these all together.

First up in the collection is The Advent of Lady Madeline, which is a novella detailing the courtship between eldest Lyons sister Madeline, and her lovely husband-to-be, Hugo, across a Christmas house party. They play the Capulets in a family production of Romeo and Juliet, and while she falls in love with his genuine kindness and sweetness, he loves how her bossiness and cleverness challenges him – aka, my favourite thing, a Hufflepuff/Slytherin romance. This was, I think, my favourite story in the collection, because it’s a great introduction to the Lyons family. Being set a little earlier than the first novel, the characters are a little younger, a little less bitter, and there’s less tension as Madeline spends a lot of time with the actually nice Hugo, instead of involved with the in-fighting of her family (it’s definitely simmering in the background, though!).

Next is Devices and Desires, the novel, which focuses on Gervase, the third son, who has been caught in between his parents’ bitterness for years. Both the Duke and the Duchess have their favourites among their sons – exacerbated by the death of Hal, the Duke’s original favourite and the eldest – and Gervase is nobody’s favourite. He forces himself to accept the fact that he’s always been in love with the woman who was engaged to his eldest brother when he died, and this is the Christmas he decides he’s going to have to make a move, for his own sanity. The romance is wonderful. Margaret, Hal’s ex-fiancée, went on to marry another man, and has now been widowed for (almost) the second time. Her character was so strong, but so in need of the kind of rock-solid strength Gervase could provide, and she was the perfect foil to him – their dialogue sings.

Their love story is actually fairly straightforward compared to the devious rivalries of the Lyons family, and I think that’s where this book was lifted from a four star to a five star for me. This family is messed up. There’s so much going on – so many real and perceived insults across the years – that there’s a huge tangle of seething resentment sitting underneath the perfect Christmassy exteriors. Margaret has the ability to untangle this grim family’s impact on Gervase, allowing him to make a change to the constant uncertainties, and bringing some peace, I hope, to the family as a whole, but it’s an utterly fascinating spectacle to watch. So often in historical romance people have perfect relationships with their siblings, but this is a very realistic and interesting portrayal of a complicated family made up of complicated people. There’s genuine affection between some of the siblings but barely concealed hatred between some of the others, and I was hooked. This would definitely be a great read for those who love those complicated, messy royal histories (if you enjoyed The Tudors, this is for you!)

The shorter stories and the two final novellas are sweet and more light-hearted. There are snippets of Christmas fun, a sweet little look at Gervase’s hunt for the perfect engagement ring, and a romance between two servants of the house. These feel like the author wanted to write her own fanfic, and I love it! It’s nice to see quiet moments of happiness that don’t necessarily fit into the main plot – yes, they may be fluffy and not serve the main story, but they’re still lovely, and help to give an overall picture of the characters’ lives. This really made the collection shine for me.

Overall, then, this is fantastic, smart historical romance with an intellectual heart. It was thoroughly enjoyable (as Marie Kondo says, I love mess!), and I’ll be eagerly looking out for further installments in the series. Five out of five cats!

One thought on “Review: A Lyons in Winter”