A middle grade retelling of Cinderella with a sassy magical heroine, a ridiculous talking dog, and a fairy godmother named Brian? It’s a recipe for a rather madcap adventure! 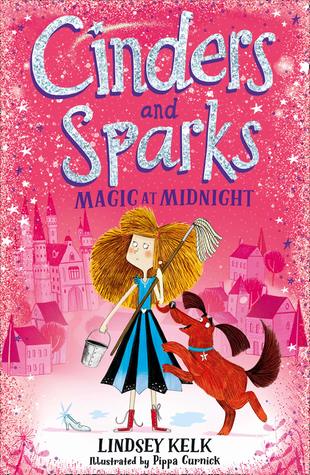 Ownership: E-ARC provided via NetGalley free of charge. All opinions my own.

I was initially drawn to this because the cover art is so cute and fun! Pippa Curnick’s art has a similar feel to Ashley King’s (illustrator of the Witch for a Week series), just bursting with energy and joy. I was really pleased to find that the writing is equally funny and fun. Although Cinders and Sparks draws on Cinderella, it does its own thing, and goes off in a very unexpected direction. This is no ordinary submissive Cinderella, but a cool, smart girl who, when the prince thing doesn’t exactly work out, takes her destiny in her own hands and sets off to have her own adventure!

For starters, Cinders can do magic – and her faithful dog, Sparks, turns out to be able to talk! Between the two of them, they bring so much magic and mischief to the story. While I’m a cat person, for sure, dog characters in middle grade can be very fun, especially when they are as obsessed with sausages as Sparks is. Fairy godmother Brian (who thinks her name is very pretty, thank you) is another stand-out character who reminded me a little of Fran the Fairy from the Witch Wars books – it’s great to see no-nonsense older females in kids books, as well as the young, brave, independent girls we love. Well, Brian’s not wholly no nonsense, but she’s certainly not putting up with it from others! There’s a definite girl-power leaning in this book, which is exactly what I want from retellings. Magic, great heroines, and cake – what more could you need?

The only reason this didn’t make it to five cats for me was that I felt that the ending was very abrupt – things are left rather in the middle of things as Cinders sets off on a quest. It’s good set up for book 2, but left me a little unsatisfied with the pacing in this volume. Still, I’ll be looking out for the next book, as this is a really great read! Four out of five cats!

6 thoughts on “Review: Cinders and Sparks – Magic at Midnight”