The sequel to Fallible Justice, one of my favourite books of last year (and always) – Echo Murder is even better than I’d hoped! 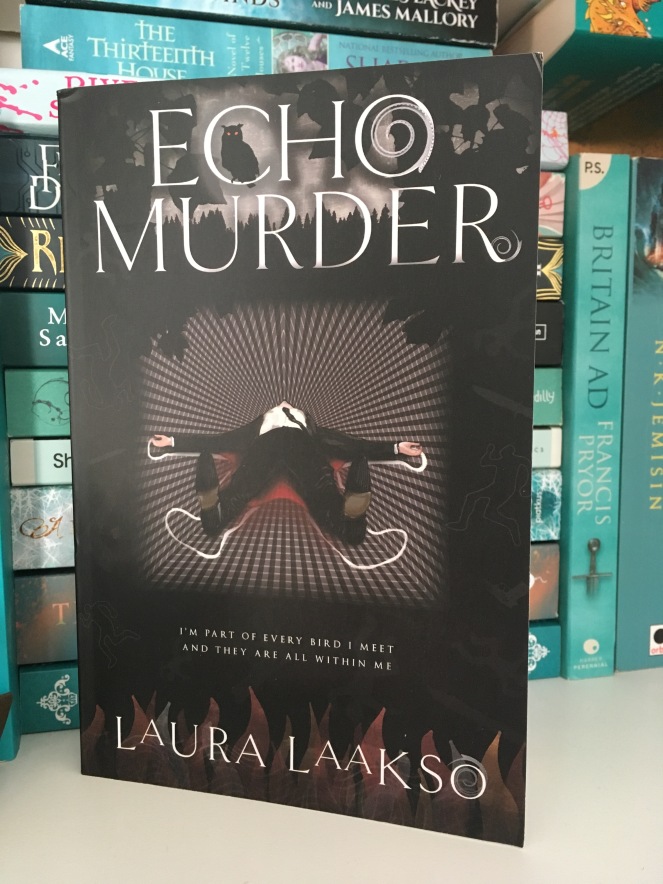 Ownership: Review copy sent by Louise Walters Books free of charge. All opinions my own.

Oh, my. This series is just so, so, so wonderful. In this second book, we get to see more of Yannia’s background, with a visit to the Wild Folk conclave where she grew up; there’s more weird crime going on; Karrion the Bird Shaman is still peeved about his affinity for pigeons (so not the right aesthetic!). We also finally get to meet Dearon, Yannia’s sort-of ex, who loomed large by his absence in the first book, and who clearly still has huge meaning for Yannia. I was so excited to find out about him, and about her past with him.

Yannia’s sojourn to the conclave can only last so long, though, as she has a series of murders to investigate – well, sort of a series. They’ve all had the same victim. Multiple murders have taken place, but the body of Tim, the victim, always fades away shortly after death. Plus, the real Tim is home safe and sound whenever this happens… Yannia has to get to the bottom of an increasingly baffling case before the murderer can close in on the real Tim. I love the way that the paranormal aspects of Old London are tied into the detective side of things – the world-building is just so solid and nuanced. Everything feels perfectly plausible, including the police attitude to magic (as rather a pain to deal with).

There’s also plenty of chronic illness rep! There’s a part fairly early on in Echo Murder that made me cry from just feeling so damn seen. As I mentioned in my last review, Yannia is just the best character. She’s smart and fierce and knows how to deal with her body misbehaving. I wish she didn’t have to, for her sake, but I love that we get to see her dealing with her illness – as I mentioned in my review of Fallible Justice, this is rep that I have never seen in another book, and it’s SO important. It’s boosted Yannia from ‘cool person I guess’ to ‘literally one of my favourite characters in anything ever’. She’s fantastic. I love her.

We only get glimpses of some of the side characters I adore: Nick, the non-magical cop; Wishearth, the kind and mysterious hearth spirit; and Lady Bergamon, the plant mage with the incredible garden. I’d read books about any of these characters just going about their daily business, so take this with a grain of salt as I can’t get enough, but I wish they’d showed up even more than they did. I hear from Laura though that they will feature heavily in subsequent books, so that’s pretty exciting! Wishearth’s relationship with Yannia is one I deeply want to know more about. Oh, and I still adore Karrion! Oh man, I could write pages about each of these characters, but I’m sure you’ve got things to do.

Look, if all this rambling hasn’t convinced you to pick it up yet, then I don’t know what I’m doing wrong, because this is an incredible follow-up to Fallible Justice. I devoured it in one sitting because it’s just so amazingly well-written and magical. Go and read them both immediately, and join me in waiting eagerly for Book 3, Roots of Corruption.