A fairytale theme park gone wrong, an android princess searching for humanity, and the seedy side of making dreams come true? The Kingdom is a brilliant mash up of sci-fi and fantasy that’ll get you thinking for sure. 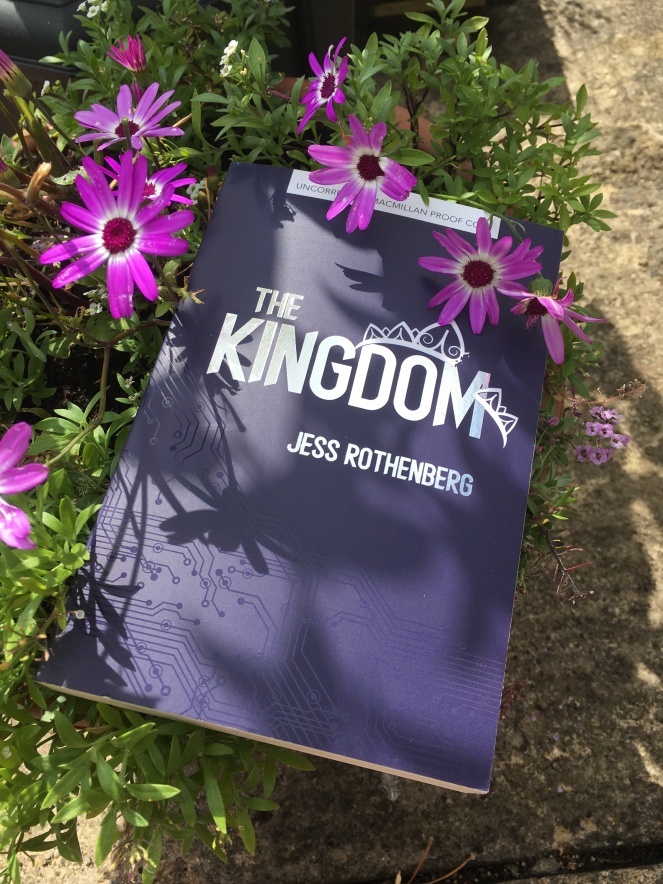 Book: The Kingdom by Jess Rothenberg

Ownership: Review copy provided free of charge by Macmillan. All opinions my own.

The Kingdom is a place where technology helps dreams come to life. Formerly extinct species roam the park, and twelve beautiful ‘Fantasists’ – half-human, half-android princesses – entertain visitors and make wishes come true. But this fairytale ends in murder, and now Ana, one of the twelve Fantasists, is in the dock after finding herself experiencing emotions and romantic feelings against all her programming…

A fairy tale theme park gone wrong sounded very tempting to me – I’ve long been fascinated by the behind the scenes workings of Disneyland, and The Kingdom takes the hidden tunnels and strict cast member rules of real life to fantastic extremes. At its heart, this is a book about the abuses women suffer at the hands of a patriarchy that sees them as less than human. The Fantasists, including our main character Ana, are part machine, but in the eyes of the people who control them, that takes away the entirety of their humanity. They’re assumed to have no more feelings than a toaster, and to be just as disposable. It’s creepy, and it’s utterly at odds with the very human personality and feelings that Ana demonstrates (uh, remind you of normal sexism much?). The Kingdom is an exciting story in its own right, as Ana plans her escape and we learn more about the murder she is accused of, but the metaphorical undercurrents will be apparent to anyone who’s ever seen the sharp end of sexism.

I really loved that this book had an unconventional narrative, with two parallel time strands: Ana’s story of the events leading up to the murder, and the court transcripts from her subsequent trial. The transcripts are interspersed between Ana’s chapters, which provides some really interesting layers to the plot, and shakes up the faith that readers may have put in Ana’s first-person description of events. At first, it seems as though Ana is naive, but as the transcripts unfold, you also learn that they, and you, may well have been underestimating her. This is a character that knows how to play the part you expect – that’s what she’s been built and trained for. She’s a fascinating character to read – you really come to support her as she teases out the horror of what’s been happening to her and her sisters, but you also become aware of how deeply unreliable she is, and the cuts back to the on-going trial underline this sharply. It’s a great way to show how a woman’s real self can be totally disconnected from the part she plays to be able to move in a society that hates.

Ana’s relationships with her sisters are one of the best bits of the book, and while there is some romance, this is a story that essentially looks at platonic love and how having those links can be what keeps you going. It’s Ana’s determination to protect her sisters that provides her motivation. I thought this was particularly poignant with Kaia, who is an older model of Fantasist with a lot less agency – she mostly repeats the fairy tale catchphrases and aphorisms that she’s been taught, and is perhaps the most child-like of the sisters. Ana’s urge to protect Kaia from a specific employee at the park who takes advantage of her (this is where the above trigger warning for implied rape comes in) is a catalyst for Ana’s realisation about the darker side of the Kingdom.

All the heavy stuff aside, I did also think that this book had a brilliant plot, and it’s utterly page-turning, so don’t worry about getting bogged down in the undertones. It’s smart and enjoyable to read – Jess Rothenberg is great at creating the creep factor and building the suspense. I’d love to see this book taught in schools, because there’s so much to unpack, while still being thoroughly engaging. I absolutely loved the juxtaposition of the glittery ballgown world and the horror lurking beneath. Five out of five cats from me!

5 thoughts on “Blog Tour: The Kingdom”