So, embarrassing story time: I thought I’d put this review up ages ago! But here it is, sitting in my drafts… Anyway, this is one of the most unusual books I’ve read, a guide to exactly how Captain Nemo’s famous submarine, the Nautilus, could have been built. 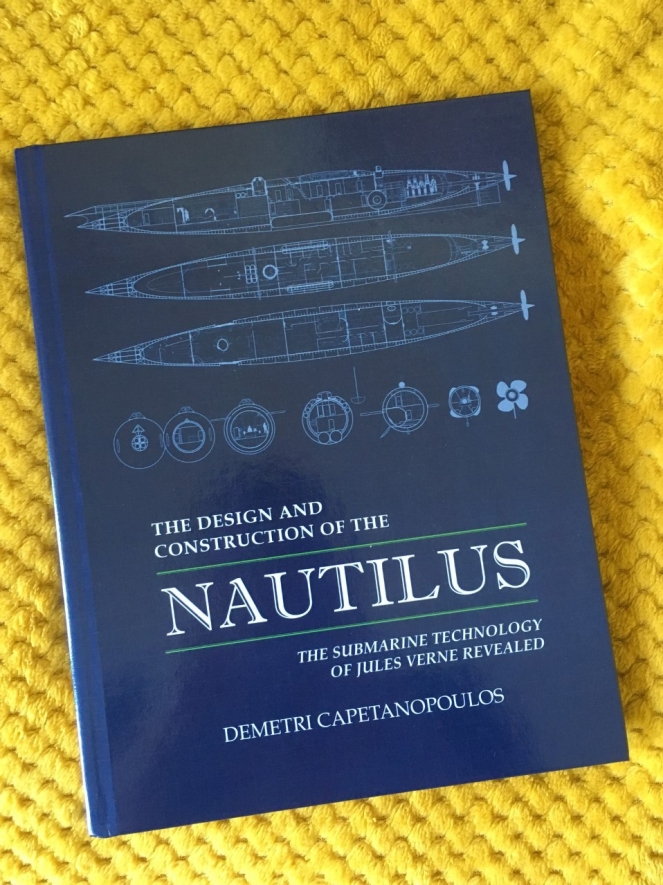 Book: The Design and Construction of the Nautilus by Demetri Capetanopoulos

Ownership: Review copy sent free of charge via the publisher. All opinions my own.

This is a fascinating read that should enthrall those who enjoy the weird and wonderful science of early sci-fi, and those who love quirky non-fiction on niche subjects. Though there is a lot of technical work here, it’s also very readable, and I don’t think you need a background in engineering to enjoy it (I certainly don’t have one, and while some of it went over my head, I picked up enough to get the gist). The aim of the book is to provide an in-depth look at exactly how the submarine from Jules Verne’s Twenty Thousand Leagues Under the Sea – Captain Nemo’s Nautilus – would have worked, based on the submarine and manufacturing technology of the time, and referring to what we now know to be possible.

I remember discovering Jules Verne’s wild science-fiction adventures as a kid, and I’ve always had a very vivid image of the Nautilus in my head, although that is probably heavily influenced by the brilliantly steampunk model at Disneyland Paris. It becomes clear through reading this book that Verne himself was fascinated by submarine technology, and that every aspect of the Nautilus has a kernel of reality, even where it reaches into the realms of impossibility. The author of this book, Captain Demetri Capetanopoulos, has even more passion for the subject, which means that no detail is left unexplored. The text is peppered with quotes from Twenty Thousand Leagues Under the Sea, as well as the original woodcut illustrations, sitting alongside imagined blueprints of the submarine and technical drawings – it’s easy to see how each part of the ship is intended to look, as well as how it works.

This is obviously a labour of love, and was a really interesting read! Highly recommended for Jules Verne fans, engineering nerds, or those with an interest in steampunk technology (whether as writers or fans). There’s a lot to learn in this slim volume, and you’ll come away with a newfound appreciation of the depth and detail to be found in Twenty Thousand Leagues Under the Sea. Four out of five cats!

4 thoughts on “Review: The Design and Construction of the Nautilus”

Follow A Cat, A Book, and A Cup of Tea on WordPress.com
Join 2,070 other followers