Though it may seem as though I tend more heavily to the fantastic or romantic in my reading tastes, I also very much enjoy a well-drawn historical novel that focuses on the history itself, so I’m excited to be helping to open the blog tour for Rachel Halliburton’s The Optickal Illusion! 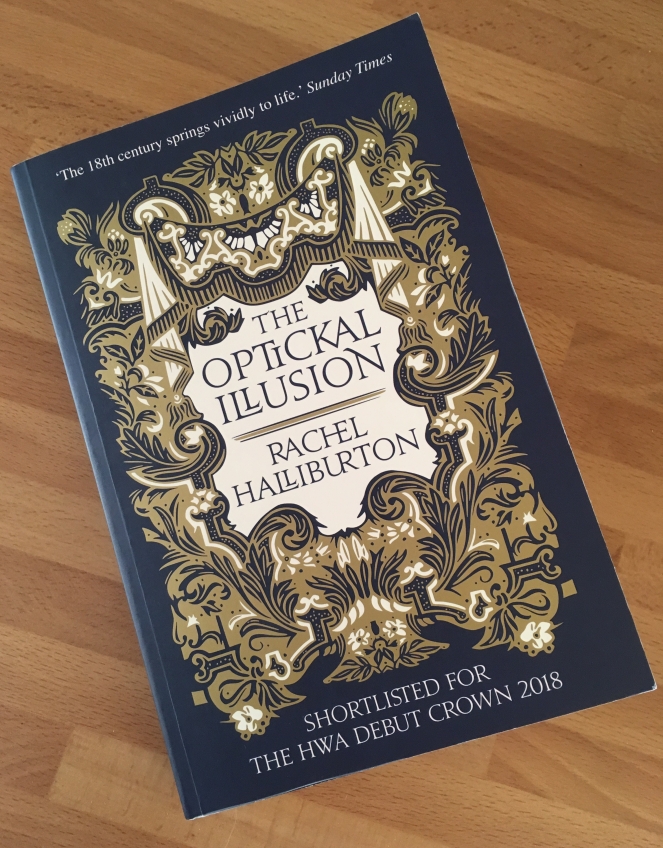 Ownership: Review copy provided free of charge by publisher. All opinions my own.

In this vividly fashioned debut, Rachel Halliburton draws from the sordid details of a genuine scandal that deceived the British Royal Academy to deliver a stirring tale on the elusive goal of achieving artistic renown.

It is 1797 and in Georgian London, nothing is certain anymore: the future of the monarchy is in question, the city is aflame with conspiracies, and the French could invade any day. Amidst this feverish atmosphere, the American painter Benjamin West is visited by a dubious duo comprised of a blundering father and vibrant daughter, the Provises, who claim they have a secret that has obsessed painters for centuries: the Venetian techniques of master painter Titian.

West was once the most celebrated painter in London, but he hasn’t produced anything of note in years, so against his better judgment he agrees to let the intriguing Ann Jemima Provis visit his studio and demonstrate the techniques from the document. What unravels reveals more than West has ever understood—about himself, the treachery of the art world, and the seductive promise of greatness. Rich in period detail of a meticulously crafted Georgian society, The Optickal Illusion demonstrates the lengths women must go to make their mark on a society that seeks to underplay their abilities.

First things first: look at that amazing cover by David Wardle. I love the intricacy of the design – though the book focuses on classical art and the blending of colours, something about the simplicity of the blue, gold and cream, and the stark but intertwining lines, really feels right for the story. It’s really evocative of the complex and detailed style of writing you find within.

This is not a period that I knew much about, going in. The main body of the book focuses on 1796-7, a time of much change in London and the world; my knowledge mostly kicks in with the beginning of the Regency, so it was really interesting to watch the political situation unfold, knowing what it would lead to. Although The Optickal Illusion focuses on the discovery of a manuscript that could change painting forever, every page allows a greater insight into the workings of the Royal Academy and the tense and volatile relationships between the key players of the period. Most of the characters are taken from real life, although some are little more than names in the historical record, like Ann Jemima Provis, the woman who is at the heart of the scandal of the manuscript, which allows the author to pull a thread of women’s experience into the spotlight against the heavily male background.

The Optickal Illusion is a quiet novel, and its strength lies in the intricate recreation of the Georgian world. We watch scenes unfold with a certain level of detachment, which lets you view the scandal as if it were one of the very paintings described. The scenes are vivid, singing with colour and texture – many of the characters remain slightly inscrutable, but while you may not get to know their individual minds, they each lend something to their scenery until you have a full and rich picture of what is going on. The pace of the book is deceptive – it feels as though it is so detailed it must be slow, but actually, the writing flows so beautifully that I found myself finishing chapters at a rapid speed. I did find that my emotional investment in the novel was jarred slightly by the inclusion of footnotes denoting real historical documents – these would have been better rounded up into the Historical Note at the end, rather than drawing the reader out of the scene by reminding them it is fiction being crafted, rather than a story unfolding. (Now that I think about it, that may well be an intentional highlighting of craft, since the novel explores in great detail the relationship between method and talent – in the moment it annoyed me, but it may well be part of the layers of the book.)

The meticulous attention to historical detail is what makes The Optickal Illusion tick. I recommend it to fans of The Doll Factory and Tracy Chevalier, as well as those looking for an insight into the Georgian art world. It’s beautifully written; rich, textured, and interesting. Four out of five cats from me!

Follow A Cat, A Book, and A Cup of Tea on WordPress.com
Join 2,067 other followers