I don’t talk much on here about my interest in fairy tales, but I’ve done a lot of research into them and love to read new collections and retellings. Fairy Tales for Fearless Girls is billed as a collection highlighting strong female characters, and it doesn’t disappoint! 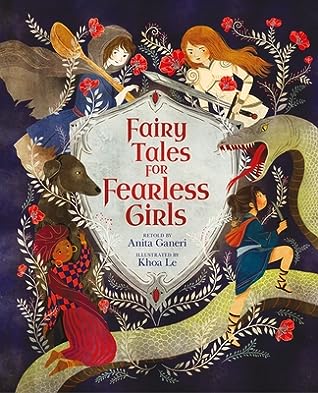 Read before: I’m familiar with some of the stories, but not this particular book

Ownership: E-ARC provided free of charge via NetGalley. All opinions my own.

This is a beautifully illustrated collection of stories, and I wish I had the chance to look through a physical copy of it, as the full colour illustrations are beautiful enough on screen, but I imagine they are even richer and bring more to the book in real life. This would make a lovely bedtime read, and the illustrations really help to make the stories sing out. It’s definitely suited for younger readers, as the language is very simple and the stories are told in a straightforward way, without much nuance.

I love the idea of collecting tales that show women in a positive light, and there are some here I wasn’t familiar with at all, so I love the diversity of bringing together stories from around the world. I enjoyed the story of Nana Miriam very much, as well as The Princess, the Merchants, and the Very Unusual Cupboard, which reminded me of some of the stories in my very favourite collection, A Book of Princesses (from 1965 – it collects unusual literary fairy tales by some well-known authors, including one of my all time favourites, Melisande by E Nesbit) in that the princess uses humour and smarts to win the day, rather than physical strength.

However, I did feel that there was a slightly weak link in the story of Atalanta. Atalanta is a very strong woman – she refuses to marry unless a man can beat her in a race – but she is ultimately forced to marry because a man tricks her into losing by distracting her with shiny golden apples. Firstly, I find the ‘women love shiny things above all else’ theme to be rather offensive, so I was surprised to see this picked at all – if Atalanta getting distracted had been reworked to be about pure distraction from the flash, or if a love of gold had been acknowledged earlier as a facet of her character, then I wouldn’t have a problem, but as it stands, a focused woman is thrown off by an inexplicable desire for something shiny. Secondly, in this version the cheating is brushed off with a speech from the man about how much he loves her, and she accepts that he tricked her out of love and he must be a good person, so that’s okay, which I didn’t like.

I’m so disappointed in this, because this type of traditional sexism is dealt with well in another story in the collection, the Romanian tale of Mizilca. I’m not a fan of the traditional moral of the story, which I’ve seen in other fairy tales (a king decides to test his knights to see if one of them is a woman in disguise – he sets traps based on feminine things like liking spinning wheels or walking daintily, and the female knight(s) train themselves to avoid them), but it’s nicely averted here, with Mizilca beating the tests, and then telling the king how ridiculous the tests were, since plenty of women don’t like/do those things, and plenty of men do. That’s a nice touch that highlights and negates the sexist behaviour, and I wish something like this had been done to the Atalanta story.

As I say, though, I think Atalanta is the sole weak link here, and overall the book is a nice little collection if you’re looking to diversify a fairy tale library. I think with its simple sentence structure and bright, bold pictures, it would suit the 5-7 age group, but if you don’t mind the simplicity, then it would be a good read for all ages. Four out of five cats!