I’ve been eyeing The Company of Eight for a while, and with the sequel The Conspiracy of Magic just out, I leapt at the chance to catch up! 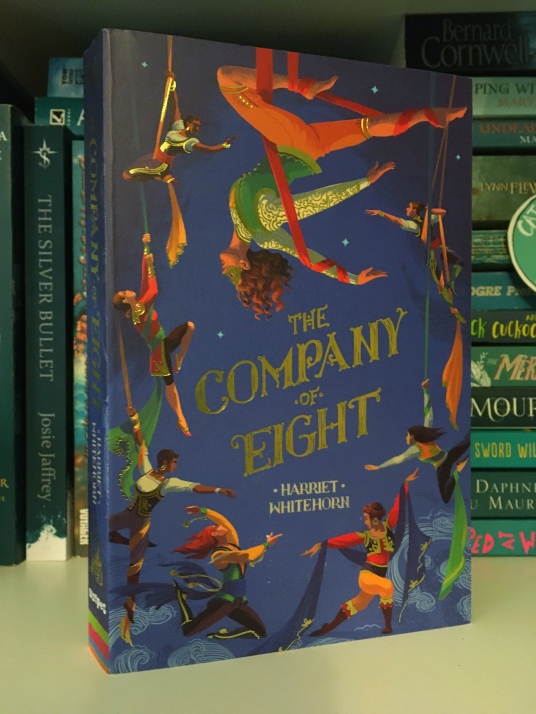 Book: The Company of Eight by Harriet Whitethorn

Ownership: Review copy sent free of charge by Stripes Books. All opinions my own.

Well! If you’re looking for magic, adventure, peril and fun, this is definitely the book to find it in! The story follows Cass, an aspiring acrobat, as she misses her chance to join the fabulous Circus Boat, and falls into a string of wild adventures. There are pirates, close escapes, acrobatics, spying, and more, and behind it all is the mysterious Company of Eight…

I love that this sits at the upper end of middle grade – Cass is 14, the story feels a little more YA (with a focus on one girl rather than siblings or an ensemble of friends) and there are hints of romance (nothing overt, but there is a returned crush). Kids between 12-15 are ill served by the stark boundaries between YA and middle grade, and we are in desperate need of books that can bridge the gap – think Diana Wynne Jones or Tamora Pierce, but though I love these books deeply, I can see that kids might want more modern reads. So The Company of Eight hugely ticks one of my boxes – all the magic of MG, with some added maturity that makes it perfect for early teens.

The Longest World is a really rich and interesting setting – I really like worlds where there’s an array of islands all with their own slightly different cultures (I mentioned this in my reviews of Deeplight and Viper). The idea of the Isle of Women particularly intrigued me, and I loved the way it was presented as a semi-mythological place with a lot of stories about it, but that the reality was rather different and more practical. Cass’s time here was among my favourite segments of the book. I also love the concept of the different boats that form floating societies, from the spectacular Circus Boat to the decadent party life of the Palace Ship – it’s such an interesting idea to add to the world, to make travel more than simply about getting from A to B.

The descriptions are excellent, and it’s easy to visualise all the different settings and the wide array of characters. Whether they are stuffy old spinsters in stuffy old parlours, or a slinky pirate’s companion with a leopard on a leash, or anything in between. You really feel drawn into the Longest World, right down to the sea spray. Unfortunately the writing isn’t quite consistently perfect: in places, the dialogue is a little bit unnatural. It’s partly that it’s overly simplistic, and partly that characters state the obvious – a little more reported speech would maybe have worked, or a few more contractions, as it just feels a little stilted, especially given many of the characters are children. However, it’s only a very minor gripe, and doesn’t detract from the rest of the writing.

I’m so glad I finally had a chance to read this, as it was a huge amount of fun, and really made me happy to see such an exciting crossover between MG and YA. I can’t wait to read the sequel! Four out of five cats!

4 thoughts on “Review: The Company of Eight”