A feisty, clever princess who breaks all the rules? Sign me up! 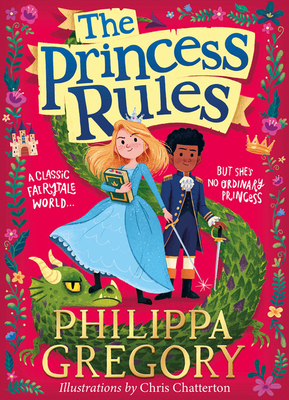 Ownership: E-ARC provided free of charge via NetGalley. All opinions my own.

The Princess Rules is a collection of three shorter stories about Princess Florizella, a sword-fighting, adventure-having, rule-breaking princess. The stories themselves take fairy tale tropes and turn them on their heads, creating fun, exciting adventures that would make great stories to read aloud, or be perfect for those gaining more confidence reading by themselves. There are a lot of genuinely funny moments, especially in the last story, where a giant moves to town – but I won’t give away any of the jokes!

I liked Florizella as a character. Her determination and passion make her great fun to read about, and it’s really entertaining to watch her rush into scrapes and then work her way out of them. I also found her parents, who are by turns proud of and baffled by their force-of-nature daughter, to be brilliantly written – they’re the ones who understand the fairy tale ‘rules’, so they act as an audience stand-in in showing how unusual Florizella’s way of going about things is. They’re mostly supportive of whatever Florizella chooses to do, even if they don’t understand it, but their bewilderment is really funny from an adult perspective!

One thing that is a slight shame is the prominence of the ‘not like other girls’ trope; Florizella is nothing like a traditional princess, and this is held up as a good thing by the narration, meaning that the more traditional princess attributes are condemned as bad. While it’s great to encourage girls to break out of the ‘quiet and pretty’ mould, it does run the risk of making it seem as though having those qualities is a negative thing, which is a dangerous idea to sell. It creates an atmosphere of girls and feminine things being ‘lesser’, and girls only being worth something if they emulate boys, which is a huge problem for both personal self-esteem and friendships. This is echoed in the fact that Florizella’s only friend is a boy (again, she is rejecting other girls, and with them, girly things) – I’d love to see Florizella make some female friends in future books, and learn that there is value in all kinds of girlhood, whether ultra-femme or tomboyish. I appreciate that some variety on the meek, beautiful princesses of classic fairy tales is needed, but that doesn’t mean we need to create a dichotomy between ‘feminine’ and ‘fun’.

On the whole, though, if you’re looking for a feisty heroine to show that girls don’t need to be rescued, then Florizella is a great pick! This would be perfect for kids who are a little too young to introduce to Patricia C Wrede’s Enchanted Forest Chronicles yet. Four out of five cats!

4 thoughts on “Review: The Princess Rules”