I was very intrigued by the premise of this book: when the chosen one dies, his best friend steps into the breach to save the world. Though the concept is strong, the execution falls a little flat… 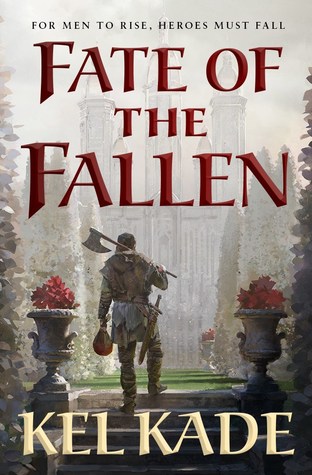 Book: Fate of the Fallen by Kel Kade

Ownership: Review copy sent free of charge by Tor Books. All opinions my own.

When the prophesied hero Matthias dies just days into his quest to save the world, his best friend Aaslo, who has always felt trapped in his shadow, refuses to accept that means they’ve failed, and tries to carry on questing. The vibe of the book is very Eddings-esque, with that classic sword-and-sorcery quest-to-defeat-an-evil-power feel, but lighter. I love the idea of a prophecy being undermined by people simply putting in hard work to make sure it doesn’t come true. Sadly, I feel like the attempt to keep this light and humorous meant that it was missing almost all the big-picture exploration that would have made this innovative.

The writing is… not amazing. It’s not egregiously bad – there are no grammar problems or misused words – but it’s a little bit lacklustre and doesn’t always blend into the background while you read. It honestly feels like an early draft of a book, before it’s been polished. The dialogue is particularly awkward and stilted, with people either announcing their inner thoughts in unnaturally clear detail, or just speaking in extremely formal constructions even if they’re hanging around with their mates. There’s one enormous problem with the writing: the main character constantly replies out loud to a voice he knows no one else can hear – so imagine that every conversation he has with a new character is peppered with these disembodied asides, his responses (seemingly unrelated to what the other person just said), and the other person’s baffled replies. It gets wearing very quickly trying to work out who can hear what, and it makes Aaslo feel really stupid.

Character work is also not a strong point. Aaslo is a perfectly acceptable confused teen farm boy stereotype – until you remember he’s supposed to be 27 or 28. The opening chapter where we’re introduced to Matthias and Aaslo has them complain about their classes and flirt awkwardly with some girls, which made me think they were about 14, and I was genuinely pulled up short when they state their ages in the next chapter. Far more engaging than Aaslo was Myropa, who is a kind of grim reaper who watches the events unfold from half-in and half-out of their world. She has much more personality, but we get so little of her story. It’s implied reapers are suicides, condemned never to rest, but that’s about it for backstory. By Myropa’s very nature, she can’t affect the main plot much, so though I liked her best, her scenes felt a little like treading water. She interacts with the gods, who again have a lot of potential to be interesting, but are thinly fleshed out and detached from the main action.

There’s just not enough lore on page here to sustain the bigger picture behind the scenes of the prophecy – we don’t even at any point see any part of the prophecy, which is strange because it is made clear that it is not by any means a cohesive text. There are hundreds of versions, all with minor changes, all with slightly differing outcomes – I would have loved to see some scholarship on why and how there are these variations. Is it a butterfly effect thing? Is it a comment that all prophecy is useless because there are so many variables? We don’t know, because we aren’t told anything except that there is one single version in which Matthias succeeds. It’s briefly mentioned that there are versions where Aaslo is the chosen one, but he fails in all of them – again, a fascinating idea, but after this mention it’s never brought up again. No one ever posits that there might be versions that haven’t been found yet in which another method succeeds – just ‘nope, that was the only good ending available’, which does NOT make sense given the variations. A character is introduced towards the end who seems to think that some versions of ‘bad’ are worse than others, but even he doesn’t tell us what we’re playing with. Look at our world. Look at the dozens of denominations of Christianity, who all interpret a canonical text in different ways; look at the differences between Christianity and Judaism, which share some texts but not others. It isn’t outlandish to think that this kind of ideological variety could exist and affect things in Aaslo’s world, and it baffles me that it wasn’t included. That it isn’t makes the world feel flat and narrow, like a richly detailed close up with a few pencil strokes for a background.

Listen, I could rant for a while about what I would like or expect to have seen in this book, but that doesn’t feel entirely fair to the book itself. What does work is the fact that this is a short and pacey book, and if you focus solely on Aaslo’s quest plotline, then it’s fairly entertaining. I’m a fan of the Belgariad, and as I say, this has a similar feel – but Pawn of Prophecy was published in 1982. I was sort of hoping that 40 years later, we’d have something similar but more, rather than similar but not quite as good. I didn’t mind reading it, and I wasn’t bored at any point – it’s just that when I think about how good and clever and intricate it could have been, it starts to feel rather disappointing. Two and a half cats.

2 thoughts on “Review: Fate of the Fallen”