I really loved Truthwitch (review here) – so why didn’t Windwitch live up to my expectations? 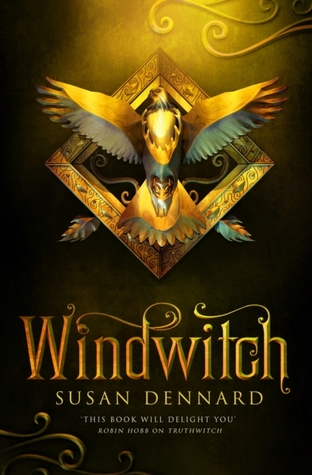 Ownership: Purchased paperback for myself from Amazon; I also had an e-ARC from NetGalley. All opinions my own.

I’m feeling very conflicted about Windwitch – I did enjoy it, but it didn’t at all live up to the greatness of Truthwitch for me. The world and magic are still really interesting, but I felt that Windwitch did away with a lot of the things that made Truthwitch work so well with my taste, and turned it into five separate, book-length chase scenes: we don’t have any of the intricate city setting or political twistiness; there’s no sisterly bond between Safi and Iseult, as they are split up for the entirety of the book; we see nothing of the Nomatsi culture, or the pirates; and absolutely no one does anything even remotely gentleman-rogue-like. I adored all of these aspects in the first book, as they came together into a smart look at a detailed world, but the plot in this book seemed to keep everyone very isolated from the outside world, and mostly running for their lives, so we lost all of this cleverness and worldbuilding in favour of plain action.

I wasn’t a huge fan of the mix of POVs – I felt there were too many, and too choppy, and they weren’t necessarily all characters I cared about after the first book. I don’t really find Aeduan interesting, which seems to be the complete opposite of the majority of readers. The attempt to rehabilitate Vivia fell particularly flat for me, and I found I couldn’t care less about Merik’s self-pity. His character is totally different to how it was in the first book, and splitting him up from Safi removed all of their fun interactions, which made both of them come across more interestingly. Merik’s chapters also felt quite distasteful to me to begin with, as he was in an accident that left him scarred, and this makes him pretty miserable and causes him to use a lot of ableist language about himself, including ‘broken’ – understandable, but it’s never dealt with or condemned, which makes it uncomfortably ableist reading.

I was also incredibly uncomfortable with the way the trans rep in this book is dealt with, after seeing people lauding the series for being LGBTQ positive (side note, I’m not sure why. One minor character is stated to have same-sex attraction, but basically nothing happens with this beyond it being mentioned, so I’m not sure that counts for much). There is a major trans boy side character, Cam, whom the narrative (Merik’s viewpoint again) continually and unrepentantly misgenders as standard; he refers to him as ‘boy’ out loud, but ‘girl’ whenever he thinks about him, and his use of ‘boy’ and Cam’s chosen name (because of course, he is outed by a transphobic relative using his deadname) is very much depicted as being part of a disguise with a ‘wink wink’ tone. When Merik is finally told outright that female pronouns are incorrect, his only thought is that he will have to put a lot of work into mentally correcting himself. The only trope this really misses is that no one slices through Cam’s binding to show his breasts. Merik is not outwardly or aggressively transphobic, he’s just really oblivious, so there is no reason for the misgendering subplot to last the entire book – it could have been over in one frank conversation at the start, leaving only a kickass trans boy character in the rep! Cam is really cool, so it’s a shame he’s consistently undermined by the narrative.

One thing that was particularly noticeable for me was that I felt like the majority of the characters ended up in much the same place overall (mentally, if not geographically) at the end of the book as they were at the start, which made it feel very filler-y to me (not great when we’re only on book 2!). Honestly, very little seems to happen in this book and there are certainly no world-shaking revelations like the last book. It’s an entertaining read, but it feels like it’s just moving chess pieces around in preparation for more interesting things to happen later on. It honestly hasn’t left me excited for the rest of the series, which is such a shame – I will press on to see if we ever reach Truthwitch’s level of fun again, but I’m wary now… Three and a half out of five cats.