I knew very little about this book going in, other than that several of my friends had enjoyed it, but it really swept me up from the get-go! 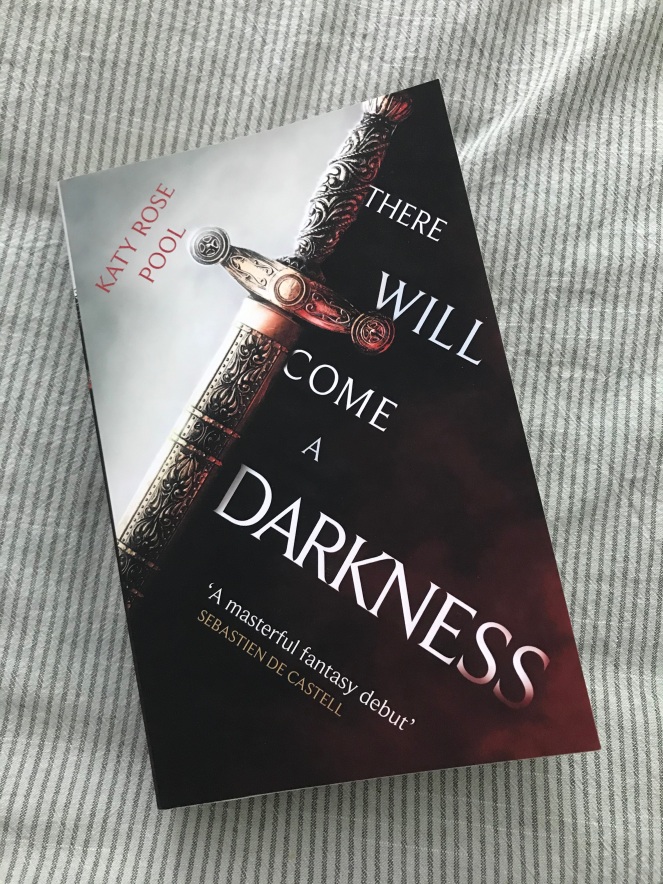 Book: There Will Come A Darkness by Katy Rose Pool

Ownership: Review copy sent free of charge by Orbit Books. All opinions my own.

The title of this book more or less sums up the main driving force behind the plot – the final prophecy ever given says an Age of Darkness is coming. There will be one last prophet who may be able to see how to avert the disaster, and we pick up the story 16 years after the signs say they were born, with multiple groups searching for them. At first, we don’t know how this is going to fit into the disparate group of characters we meet, but as they all become entangled with each other and the search for the prophet, things get very interesting… It’s a classic fantasy premise, and one that feels like a favourite jumper – you know exactly where you stand with building blocks like this. However, it’s the execution that keeps it fresh, and I thought both the world-building and the character work were just spot on with this book – it’s great epic fantasy for a modern age.

Five viewpoint characters feels like a lot, and when they were all being introduced one after the other, I was worried it might be too distracting to keep changing between them. Luckily though, that wasn’t the case. All five have easily distinguishable voices, and feel like their own people – even when they’re physically with other viewpoint characters and we get multiple views of a scene, their takes on the things happening feel so different and unique to them. I genuinely didn’t have a favourite, which is astonishing – I was invested in all five of them, from killer-with-really-good-reasons Ephyra, to her dying sister Beru, to refugee prince Hassan, troubled seer Anton, and insecure paladin Jude. They are all very young, in their late teens, and they’re well-balanced between realistically inexperienced and fantasy-capable. They’re also, for the most part, good people trying to do their best, which is one of my favourite things in fantasy. I liked that for the most part, the chapters were very short, which kept things flowing and interesting – there’s no rigid order to the POV switches, we just go with whatever feels natural to keep the story moving. It was just handled really well.

It’s also got some pretty good queer rep, though romance isn’t really a focus. At least two of our POV characters have same-sex attraction (no labels are given), and there are hints that a relationship might blossom between them (if they ever get to take a breather from saving the world). There’s also a cute m/f romance that gets a little bit more page time and a couple of kisses (again, in between a lot of peril, so it’s really not a focus of the plot). Things are really only just kicking off, and this is the first book of a trilogy, so I am excited to see where both romances go, and if we get any more!

I’ve had an interesting run with larger fantasy books recently, where I’ve been struggling to connect to characters or stay invested in their plots, so I was genuinely surprised at how quickly and thoroughly this book grabbed me. It’s just under 500 pages, but I read it in one sitting (while my bath went cold!). It’s just a total romp of a book – it would make a great gateway book for someone just testing the waters of epic multi-cast fantasy, as it’s just so darn pacey and readable. It’s sold as adult (in the UK at least), and feels more like adult fantasy in style, but would equally appeal to YA readers, I think. I personally disagree with all the official comp titles in the blurb – it’s got far more in common with Robin Hobb or even one of the less-depressing Guy Gavriel Kay books (I love him but man does he make me cry) than Throne of Glass, for sure. There’s a sense of hope and determination that suits my reading tastes down to the ground – no grimdark here!

This would be perfect for fans of Sam Hawke’s City of Lies, Sebastien de Castell’s Spellslinger or KA Doore’s The Perfect Assassin, with it’s classic-but-fresh vibe. I can’t wait til September for the next book! Five out of five cats!

12 thoughts on “Review: There Will Come A Darkness”

Follow A Cat, A Book, and A Cup of Tea on WordPress.com
Join 2,070 other followers