You ever just read a book so perfect for you that it’s like the author wrote it on spec to your preferences? Yeah, this book is EXACTLY what I’m looking for in a YA fantasy. 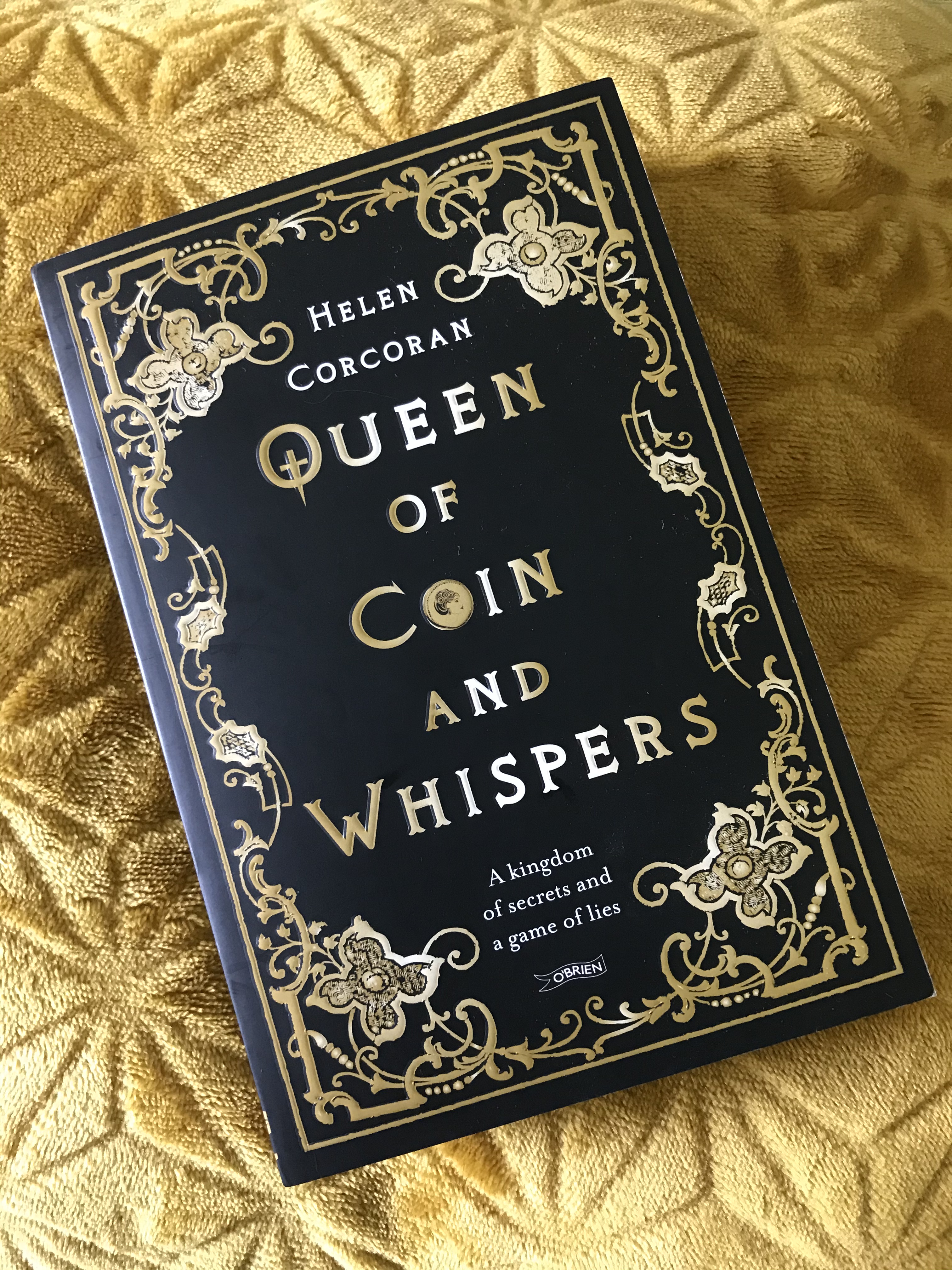 Book: Queen of Coin and Whispers by Helen Corcoran

Ownership: Proof and finished copies sent free of charge by The O’Brien Press. All opinions my own.

First things first – how beautiful is that cover? It’s stunningly opulent and really suits the intricate mix of royal intrigue and romance. The design is by Emma Byrne and I hope to see more of her work on covers as this sort of thing is hugely appealing to me!

On to the book itself. Queen of Coin and Whispers has two narrators: Lia, the young, recently-crowned Queen of Edar determined to right the wrongs of her dissolute Uncle’s reign; and Xania, a fiercely intelligent young woman determined to investigate her father’s suspicious death, who becomes Lia’s spymaster. As the two of them try to get to the bottom of the corruption in Edar, a romance sparks between them, but this is not just a romance – it’s also well balanced with a realistic (for fantasy!) look at the day-to-day work of managing a kingdom, thereby hitting all my buttons. This is the epitome of ‘court fantasy’. It has the gorgeousness – the balls, the dresses, the swoony romance – AND the hard work – the policy issues, the etiquette, the shifting alliances. It combines both seamlessly, which was a wonderful surprise when I see so many ‘court’ settings in YA that only offer the first.

There’s bucketloads of great on-page queer rep, too – Lia is a lesbian, Xania is a lesbian and demisexual, Matthias (Lia’s closest childhood friend) is gay (but deftly sidesteps being ‘the gay best friend’), Zola (Xania’s sister) is bi, and there are multiple queer side characters (as in, the majority of the cast!). There’s also no real homophobia, only the need for the ruler of a country to have an heir, meaning male-female marriage is preferred. I love a queer-norm fantasy! It’s also so sex-positive, though not explicit, with sex presented as a healthy (but not mandatory!) part of a relationship for characters that are interested in it – I’m not #ownvoices for it, but I thought the depiction of Xania’s demisexuality was nicely done.

The chapters switch back and forth between the two protagonists, in first person, and it’s a testament to how strong both voices are that I didn’t ever lose track of whose chapter it was (I do this a lot). At the beginning of the book, Xania’s cynical, where Lia is cautiously optimistic, and they approach problems from very different angles, informed by their lives so far. Lia is aware of her privilege, but still sits within it, so Xania’s lower-class (though still technically wealthy) viewpoint both nicely offsets this for the reader, and forces Lia to work harder in her actions. Both Lia and Xania are fascinating, intense characters who feel real and flawed. They make mistakes, they lose their tempers, and they are not immune to hurting each other. Though both, in their different ways, are extremely strong, powerful women, it’s wonderful to see them be so human and messy. It helps you to really believe in their relationship, but also just to believe in them as people. I was fiercely behind them every step of the way as they struggled to prove themselves and find a way to fit their lives together safely.

Okay, let’s talk about my very favourite thing about this book: it actually deals with statecraft. I’m a huge fan of court fantasy and medieval political intrigue, but as I mentioned above, so often it’s used just as set dressing for a story that then ignores the actual technicalities of running a kingdom. Queen of Coin and Whispers joins my very small list of books that feel like they really get into the difficulties of running a country and navigating the complex mesh of shifting loyalties and aristocrats stuck in their traditions and privilege (The Goblin Emperor is there, as is the Farseer trilogy, State of Sorrow, and to a certain extent, most of Tamora Pierce’s Jonathan scenes). It’s one thing to have a feisty young princess take the throne and say she’s going to make sweeping changes to the old regime, as so many fantasy books offer, and entirely another to show her grappling with issues in the Treasury, with managing a network of spies, with the complex etiquette of marriage alliances.

One of the first issues Lia has to deal with is the failure of the grain harvest, which has a knock-on effect on so many other issues throughout the book, both political and personal – it sounds boring, but it isn’t, and I was overjoyed to see something like this included to show how complex ruling is. Every single decision a ruler makes will influence something about the kingdom or the court, even dress choices. I love that Lia (and all other rulers before her) need a team to help her cope with everything that’s going on, and we actually get to see them doing their jobs, from spymaster to treasurer to admiral of the navy. Look, maybe I’m a nerd, but I love seeing this butterfly effect, this confirmation that ruling is a full-time job and then some, rather than the kingdom just running quietly in the background while the ruler gets on with their personal plot. It’s pulled off to perfection here.

The intrigue, too, is brilliantly done – there’s everything from petty squabbles to outright treason, and it takes a while to uncover the true heart of the corruption, which all helps to further cement the picture that being queen (or spymaster!) is never going to be easy, especially if you’re trying to implement a total culture change. The cast of players is large, but not bloated – I felt like there were enough to make things interesting, but didn’t lose track of who was playing on which team. Reveals and betrayals feel simultaneously shocking and almost a relief, like they’re the natural culmination of all the tiny hints we’ve seen to this point, and that’s when you know you’re in talented hands. I obviously can’t tell you anything about the plot, but it was a great ride. (As a sidenote, I’d usually read a book like this in one sitting, but instead this took me over a week of short bursts of reading, due to the baby, but I honestly never lost track of what was happening, because it left such a strong impression. I was itching to get back to it and carry on!!)

I wasn’t at all surprised to find out a few days ago that Helen Corcoran is a fan of Tamora Pierce, because although this is definitely aimed at an older audience than the Tortall books, for me they share a sense of the reality of courtly life. They both have an understanding that there are dynamics at play beyond ‘the ruler is in charge’, and they both offer characters that understand that with a throne comes a great web of responsibilities, obligations, and traditions that will need to be managed if change for the better is going be made. And they both pull that all off with optimism, fun, and a huge array of gorgeous and romantic details. I would hesitate to call this book ‘cosy’, what with all the fiercenss and betrayals, but something about it just feels like my natural reading habitat, so I found it an incredibly comfortable and comforting read – more of this sort of thing, please!

10 thoughts on “Review: Queen of Coin and Whispers”

Follow A Cat, A Book, and A Cup of Tea on WordPress.com
Join 2,067 other followers