Though I read a lot of historical romance, I tend to stick mostly to the 19th century. Redeeming Her Viking Warrior is my first Viking read, but I jumped in with both feet because I love the author, and it didn’t disappoint! 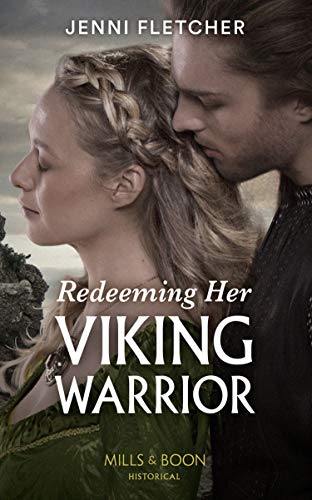 Ownership: E-ARC sent free of charge by the author. All opinions my own.

Content warnings: Violence; injury and healing; discussion of past murder, including the murder of a pregnant woman.

Redeeming Her Viking Warrior is the fourth book in the Sons of Sigurd series, in which five different authors tell the stories of a set of Viking brothers after the murder of their father and other members of their family. I’ve not read any of the previous books, but when Jenni offered me the chance to review this one, I jumped in anyway, because I love her characters. It stands alone well – I was never confused by the over-arching plot, and though the hero’s brothers do appear, their stories are woven in just enough that I would still be interested in reading their books. Like with most romance series, I’m not fussed about knowing that the protagonists of previous books have found happy endings – that’s sort of the point!

This book follows Danr, one of Sigurd’s illegitimate twin sons, as he tries to find out who was behind his father’s murder, and his relationship with Sissa, a healer who eschews human company after her family was murdered. Sissa lives in the forest with her semi-tamed wolves, and wants nothing to do with anyone, let alone unknown warriors, but when she finds Danr badly wounded and barely conscious, she can’t stop herself from patching him up (I love this as a trope, the person who doesn’t want to help but can’t leave someone suffering!). Though both Danr and Sissa have viewpoint chapters and great arcs, this definitely feels like Danr’s story, perhaps because there is a stronger plot that runs through the whole series rather than the usual romance series links of groups of friends or siblings with self-contained stories. It’s unusual in what I’ve read to have the hero be more of the focus than the heroine, but I liked it!

I always love the way that Jenni writes her characters – she gives them such realism in the way they handle (or refuse to handle!) their emotions. Both Danr and Sissa start out in the latter category, almost aggressively suppressing their emotions, and it makes them pretty prickly to begin with. Sissa, in particular, has such thick walls up that it’s hard to see at the beginning just how she’s going to get back to allowing herself to feel, but I loved watching her slowly bringing down her defenses in the face of Danr’s kindness. Danr, for his part, is half impetuous warrior and, unexpectedly, half quiet homebody – Sissa’s amazement that he loves to cook and tell stories is really sweet! The two of them are a great match for each other – they’ve both been hiding from their true selves for too long, and they sort of drag each other reluctantly back into the light. The chemistry between them is also fabulously clear, as usual.

I don’t think that I’m necessarily a convert to Viking romance as a whole – I like the clear-cut manners and rules of Regency and Victorian society too much, and I think that the knowledge I have about the locations, activities and fashions helps to make the story feel more familiar and cosy for me. Plus I just prefer flirting in ballrooms to bonding over survival! But even though I was out of my comfort zone, this is another really great read from Jenni Fletcher, full of warmth, sweetness and a believable build into love. Five out of five cats!

One thought on “Review: Redeeming Her Viking Warrior”